When picture drawing guy James Hart and word writing guy Adam Wallace discussed the prospect of doing an improvised comedy course with Impro Melbourne, the conversation went something like this:

James: I’m thinking of doing an improvised comedy course with Impro Melbourne.
Adam: Why?
James: I want to be the funniest person in the entire world.
Adam: To me, James, you already are.
James: Awwwwwww.
Adam: Awwwwwww.
Heath (James’s son): WAAAAAAAAAAAH!
Adam: Alright, I’m convinced. I’ll do it with you.
James: I didn’t ask you to do it with me.
Adam: See you there.

And so an ironclad agreement was struck. Adam and James would do the course in an effort to loosen up their presentations, build confidence, help with their writing and illustrating, and generally increase their fear of failure. No. Wait. That’s wrong. They would learn to fail spectacularly. That’s sounding even scarier. Shut up, you are. They did it okay?

James had found Impro Melbourne after searching on Google (once he stopped watching babies on waterslides). Spontaneity is the introductory course Impro Melbourne offers, saying it provides basics of impro, unleashing creativity, encourage fearlessness, break out of your comfort zone and have fun. It all looked awesome!

Next step was enrolling.

They did that. That was easy.

Then they had to turn up for the first class … that was scary! It was real now.

Their teacher was Katherine, and they were immediately put at ease by playing some name remembering games (which really work! We still remember the moves people made a year ago … I mean, we can’t remember their name, but whatever).

The next five weeks were filled with games and exercises and as the time went on, bonds were forged at a rapid rate with other people in the class. It was quite a large group, and everyone had this amazing willingness to give things a go, which was inspiring. All the way through, Katherine guided and took a personal interest in everyone, and catered to strengths and weaknesses with the activities she chose. 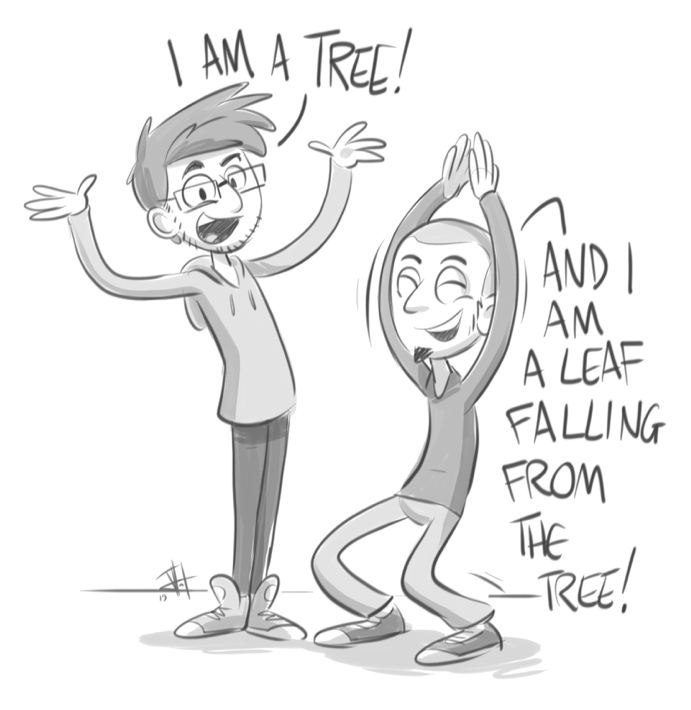 Adam and James loved it so much they went back again and again and again, learning new skills, doing new courses (Narrative and Play, Play, Play), forming new friendships and deepening the friendship they already had with each other.

Adam: Doing impro elevated my presentations at schools by at least a metre. I listened better, which allowed me to make better responses. I was also happy to just give things a go and if they didn’t work, it really didn’t affect or effect me as much as it used to. The impro activities also really helped my writing, giving it a flow and looseness it hadn’t had before. This didn’t mean it always worked, but that was just time to cry ‘AGAIN!’ It was always fun and I always deleted the swear words! 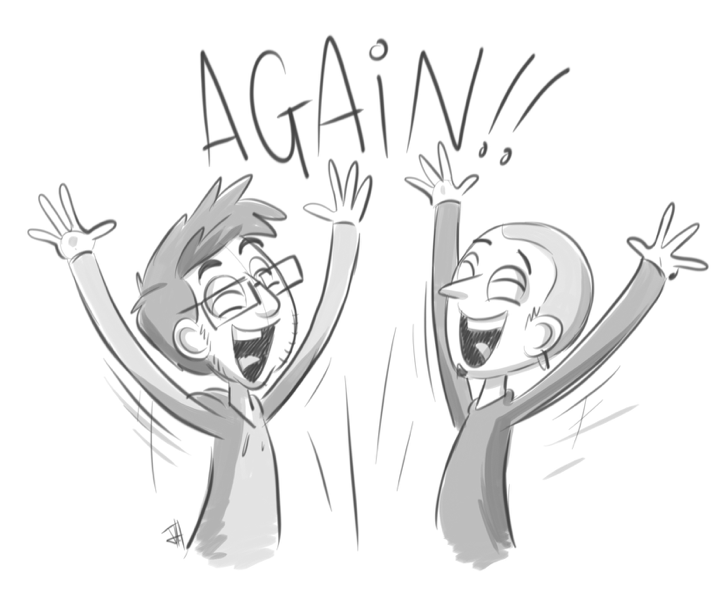 James: I set out to do the first Impro Melbourne course as mental preparation for presentations that I was beginning to do at schools and writers’ festivals. But, Impro has helped me in more ways than I thought imaginable. As well as helping me be more comfortable in front of an audience, it's helped me in my everyday to be more confident, face fears, push through my own perfectionism and let go and just relax and have fun!!

Overall, both James and Adam felt doing the impro courses (and they are both still going!) made changes in both their work and lives, and they are keen to keep on going back for more … but that dolphin calling game should be banned.