The Final episode of the GEB - “WEDDINGS, WIDOWS AND THUMB WARS” 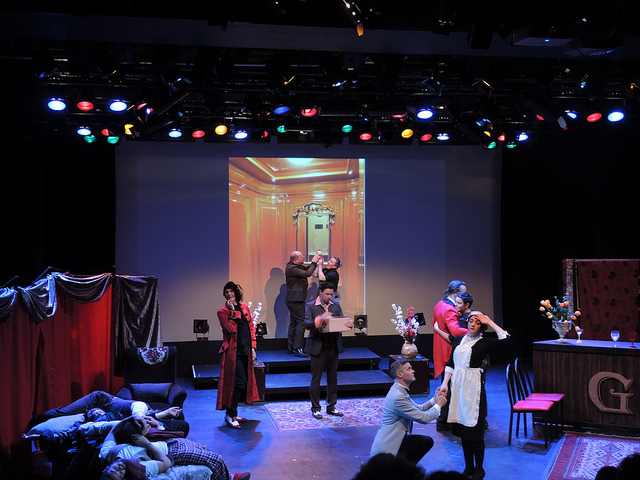 by Katherine Weaver on 25 September, 2018 in shows

It’s Theodore’s birthday! He is served a ‘bomb Alaska’ cake prepared by the Cook with Dr Foottee and the Countess. Theodore has finally achieved his childhood dream of owning the GEBH – could a romance with the Countess be next?

Having forged a certificate claiming the Cook’s husband is dead, Dr Foottee hopes the way will be clear for their marriage. The Cook is devastated to know her husband has died – of tinea!

Jacques has been avoiding Griff after their night of passion by hiding in the elevator for three days. Jacques tries to break it off, but warms up (as usual) upon hearing of Griff newfound riches. Meanwhile, Theodore has plans to turn the seventh floor into an orphanage for children affected by war – with the Countess to run it.

The Cook is only a widow for a short time, before finding her criminal husband Seamus in her room. She admits to having slept with Foottee – but only because she has been undercover, aiming to get revenge. You see, Foottee is not who he appears to be – he is the man who killed their son Paddy!

After the success of his recent autobiography “Cliché, Cliché, Cliché”, famous writer Jean-Claude Cliché reveals he is working on a new novel – it’s set in a hotel and features a number of characters that seem very similar to those at the GEBH. Meanwhile, Griff gives Yvette and Tomas dancing lessons for their wedding. Excited by the upcoming celebration, Griff shares that he and Jacques are also in love. Yvette warns Griff to be careful – Jacques is an adventurer who throws his heart around.

Out on the lake, Theodore and Cliché go boating. Now that he has money, Cliché suggest he marry the Countess – Theodore is speechless. Later, at Theodore’s surprise party, Cook introduces as Seamus as her ‘brother’ Donny. Everyone has brought Theodore a gift. Foottee gives him a ‘Warphanage’ sign. Jacques has built a corn statue of him. Cliché’s gift is to set up a romantic dinner for just Theodore and the Countess. The Countess laughs at the idea of romance, but Theodore confides that since quitting as concierge, the GEBH is no longer his first love and there is space in his heart for another…

Later, Foottee is preparing to flee – he’s sure he knows ‘Donny’s’ face. Seamus and Cook enter, and Cook reveals Foottee to actually be Prince Humperdink, war criminal responsible for many deaths, including their son’s. Seamus wants revenge. Cook sarcastically suggests a cockfight - Foottee is indignant: “I don’t have a cock!” Humperdink challenges him to a traditional thumb war to the death – but first he has to reunite with his mother.

Jacques and Theodore have a D&M. Jacques reveals he doesn’t really love Griff, while Theodore admits his adoration for the Countess. Having their own D&M in the ice baths are Yvette and the Countess. Yvette is so proud of Tomas, but wants to see him become more powerful, even owner one day ‘at any cost’. The Countess reveals she thinks very highly of Theodore, and Yvette observes “you’re in love with him”.

Back at the Countess’s room, Foottee enters with his baby. He reveals his true identity - as her long lost son Humperdink! He has brought the baby for the ‘warphanage’. Their reunion is bittersweet, however, as the Countess is worried about losing him again in the upcoming thumb duel. She gives him the Medals of Pomerania for good luck.

The thumb duel begins! The Cook is torn between her husband and Foottee who she still loves. Seamus wins a vicious battle, and kills Foottee, ripping of his ears and eating them for good measure. Seamus forces Cook to renounce her love for Foottee over his corpse. She does so reluctantly, promising loyalty (and ten more kids).

Everyone celebrates the wedding. The married couple are happy, but agree that Theodore is still in the way of their dreams. Jacques (after learning the meaning of love from Cliché) reunites with Griff. The Countess feels the presence of Foottee’s ghost, the loss is confirmed when Theodore brings her his medals – “Pomerania is lost again”. She realizes her real family is meant to be an adoptive one – the GEBH. She and Theodore go to walk by the lake, while Cliché narrates and writes of all of the drama and events he is witnessing in his new novel.