by Jenny Lovell on 10 January, 2018
Halfway through my first year of impro classes, a fellow student said that impro is “my fruit and veg, it’s

Now that I’ve done a year of classes, some one-off workshops and seen Impro Melbourne shows, I think I get what she means. As well as being a super fun and social thing to learn, impro feels good to do, for your body, heart and head.

As adults we find it hard to play - to reconnect with our playful, childish, silly selves. Impro opens the door to the playhouse. And playing is fun and incredibly liberating. It’s hard work being a ‘serious’ grownup out in the world. This past year, I haven’t laughed more than I have, every week, at an impro class or show.

‘Flow’ was coined by a psychologist to describe when you feel fully immersed, happy, focused and energised by whatever you’re doing. You can be ‘in flow’ doing sport, playing music, gaming, making art and... doing impro.

You’re doing a game in impro class, then suddenly you get “on a roll”. You’re in the zone and loving it! It’s an amazing feeling. You can’t predict when it will happen, but it’s one reason I keep coming back.

3. Impro makes you a better listener and collaborator

Impro teaches you really handy skills - to work with other people and to listen closely. You work in small groups, in a non-competitive way. As impro guru Keith Johnstone says, the improvisor’s skill lies in releasing your partner’s imagination. To do this, you learn how to listen closely, to words, body language and gestures.

There’s lots of talk about how good it is to make mistakes, to learn from our failures, but it’s easier said than done. Enter: impro! Where you get to fail ALL THE TIME!!

One of my favourite times from my first term was playing a fast-moving game where everyone eventually got tongue-tied. Instead of feeling embarrassed and feeling like a dawk, the whole group would celebrate the ‘failure’, throwing our hands up in the air and yelling “Again!” to start the game again. We all fail and it’s ok.

5. Impro makes you laugh and cry 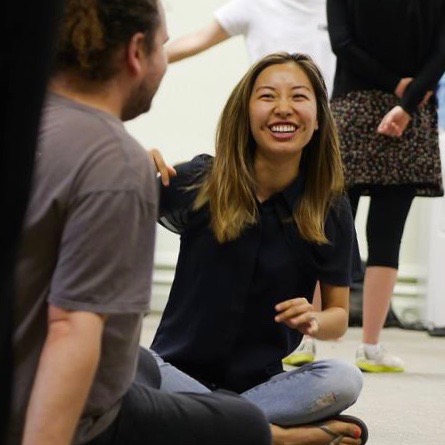 A lot of impro is about comedy, which is awesome. I love comedy and laughing and making people laugh. I love laughing at the kooky and wonderfully individual senses of humour of my classmates on stage.

What I didn’t know, until I took classes at Impro Melbourne and went to their shows, is that impro can also be incredibly moving. It’s live theatre. It’s storytelling. It’s extra magical because it’s happening spontaneously, and the beautiful moments you’re watching will never ever be repeated.

6. Impro is not just for extroverts or actors - it’s for everyone

When I tell people I do impro classes, the most common response is, “I could never do that.” Making things up on the spot can sound scary and there’s no denying that it is scary sometimes. But you’re not thrust in front of people to make things up and risk making a fool of yourself. You learn everything in a supportive, safe environment with skilled, experienced and empathic teachers, which makes all the difference.

There’s a whole range of people who learn and perform in impro. There’s people who get anxiety (like me), who get shy, who’ve never performed, who are introverts and extroverts and everything in between. Impro is for all us.

Try an impro class. You’ll laugh, you’ll cringe, you’ll grow and be a kid all at the same time.