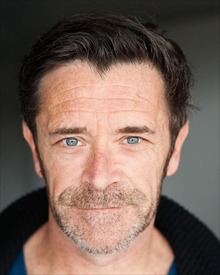 We are incredibly excited to welcome Trevor Major to the Impro Melbourne Ensemble!

Since graduating with a Bachelor of Education (majoring in Drama and Dance) from Victoria College Rusden Campus in 1986, Trevor has worked consistently in nearly every area of the performing arts. He has appeared in various stage shows, television series and advertising campaigns over the past twenty years, including his own show at Melbourne International Comedy Festival.

Trevor most recently appeared alongside Hugo Weaving in the feature film, HEALING.

On television, Trevor played Steve ‘Salty’ Saltmarsh in Southern Star’s Telemovie, BEACONSFIELD. He featured in RUSH (2009) as Colin Kennard, and played the recurring role of Neville Tomlinson JANUS (1994-1995). Trevor has featured in guest roles in popular series including BLUE HEELERS, NEIGHBOURS, BANJO PATERSON’S MAN FROM SNOWY RIVER, FEDS and STINGERS, and the telemovies THE LAST OF THE RYANS and STIFF, one of the films in David Wenham’s Murray Whelan series.

An accomplished stage performer, singer and writer, Trevor appeared in his own show TREVOR MAJOR IS … THROBBIE MILLIONS (2006) at the Melbourne International Comedy Festival. He also performed in the Comedy Festival show BEGA THAN CHEESES (1997).

From 1987 to 1991 Trevor co-devised twelve original Australian plays with THE WOOLLY JUMPERS and the BACK 2 BACK theatre companies, including LOVE AND OTHER SHARP OBJECTS.

Trevor was a professional improviser and founding member of THEATRE SPORTS (FLYING PIG THEATRE COMPANY), and as a writer he has provided comedy material for Channel Seven’s FULL FRONTAL and was part of the writing team for OPENING LEARNING on ABC-TV, as well as appearing as a comedy regular on that series, and JUST KIDDING on the Nine Network.

In demand as a both a Corporate Performer and a Street Theatre Performer, Trevor has devised & performed for both the MOOMBA & LYGON STREET FESTIVALS; the opening of the Melbourne Sportsgirl Centre; the World Cup Soccer Qualifier at the MCG; for Nike at the Australian Open; and at numerous functions as part of TROUPE DU JOUR. He was a founding member & Company Director of Dramatic Edge (1993 - 2008), and is currently a principal member of Unscripted Business (2009 - 2015) both leading edge & innovative Melbourne based Corporate Theatre Companies.