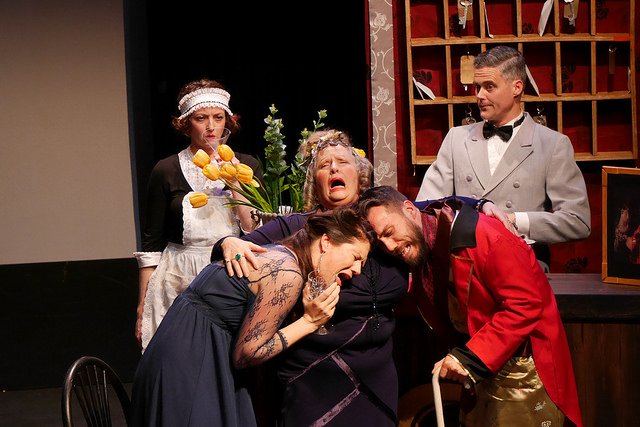 Last week the hotel had a new visitor – chocolate empire heiress Winsome Lusome. In her honour, Bridget serves her special dessert of rabbit intestines – with the heart, as always, reserved for her beau Dr Foottee.

Meanwhile, Sister Agnes suffered a plague of religious doubt and reveals her worries to the ultra-Catholic chef. Bridget believes all Agnes needs is a suitable mission. At that moment, a panicked Dr Hans Foottee enters. In a state of incredible hubris he attempted self-operation, and has accidentally lopped off his penis! Agnes vows to find the missing appendage.

Meanwhile, the Countess is trying to find her illegitimate son by interviewing the young males of the GEB. She gets DNA samples from both Tomas and handyman Sharp by having them lick one of her Borsova diamonds.

Sister Agnes and Foottee search for his missing member in the cornfield. Foottee wishes to confess (despite Agnes’s protests that she is NOT a priest) that he is a medical monster who has gone too far with his experiments. But Agnes, with her faith waning, shares her awe for Foottee’s miraculous creation of life on earth.

Winsome tells Bridget that she needs to marry a man (the dumber the better) in order to inherit her father’s chocolate empire. At Tomas’s bachelor party, Bridget sends her and Jacques (the dumbest man she knows) off into the cornfield to get better acquainted with a parlour game involving the strategic removal of each other’s clothes.

Hallelujah! Agnes has found the absent appendage (behind the sofa, of course). Her prayers (‘Dominus Erectus!’) and handyman Sharp’s tool belt are enough to reunite the doctor and his instrument.

After donning Jacque’s discarded concierge jacket, Tomas has developed a sudden taste for power. As they rehearse their vows to each other, they vow to rule not only the hotel, but the whole world. At their first staff meeting in charge, however, Yvette enrages the Cook with her suggestion that the menu be changed! Bridget throws off her apron and storms off. Sharp, inevitably, is crowned the new chef, saying ‘If I can reattach a penis, I guess I can handle it’.

Jacques and Winsome wake up in bed together. ‘You will marry me now!’ she informs a terrified Jacques. At first fearful that his bachelor days are behind him, he changes his tune when he realizes there is a chocolate inheritance on the line.

After weeks trekking through Paris with Footte’s baby, Theodore returns to the Grand Budapescht. And just in time. Deceased former owner Belvedere Hogg’s will has arrived by pigeon post – he leaves all his money to the Countess, and the hotel to Theodore. This turn of events enrages Yvette and Tomas, and puts their plans in jeopardy.

Sharp is taking a break from the kitchen and is doing some repairs in the church. Agnes rips off her wimple and declares there is no God! She recounts in detail her killing and eating (and sleeping inside) of the St Bernard that saved her in the mountains, all to Sharp’s horror – ‘I am a sinner!’.

A ruffled Sharp then tries his hand at cooking ‘goose cupcakes’, resulting in universal disgust. He throws down the apron and realizes his true usefulness lies in being a simple handyman.

Jacque and Winsome’s blissful arrangement sours when Winsome hears of Theodore’s good fortune. Looking to improve on one Jones brother with the other, she flirts with an appreciative Theodore, who almost forgets himself before the Countess reels him back in.

After drinking a cocktail of vodka and holy water, Sister Agnes now has divine powers – but is it at the expense of the doctor dwindling doodle? She declares herself to be the Priest of the Severed Penis and claims she and Foottee were destined to meet and bring science and faith closer together. Cook and Foottee beg her to use her glowing powers to fix Foottee’s infertile phallus.

The Final Episode is this Sunday!