Each year I go to London to teach improvisation. One of the real treats of being there is I get invited to play Grand Theft Impro. It’s a great chance to play with my old pals Dylan Emery, Phil Whelans and their ever-changing cast of thousands. As I said, it’s a real treat. The venue is an intimate but welcoming room upstairs in a pub, which is very common in London. The audience climbs a narrow set of stairs, pint in hand, and away we go. The 2-hour show features a first half with lots of impro games and a second half that is more scene based. As inspiration for the second half scenes, they ask the audience for 10 titles and promise to do all 10 titles in the 50-minute set. It is great, great fun. 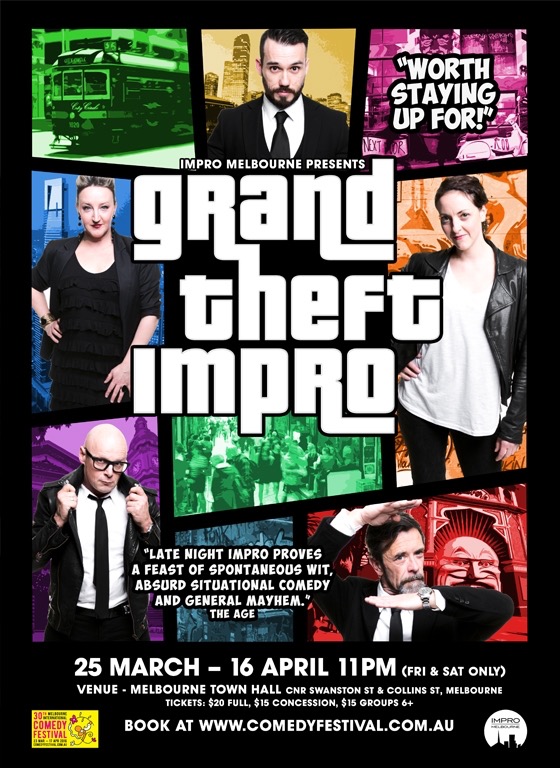 Last year, when I was thinking about Impro Melbourne’s offering for 2016 MICF, I couldn’t shake just how much fun I’d had doing this format in London. The audience loves it and it gives the improvisers such freedom to play. I asked the boys in London if we could have a go at it here and they said YES!

The show will have our impro hoons grabbing on to the steering wheel of comedy and tearing through the streets of imagination, spinning you out with laughter—lap after lap around the stage. Have I made enough car and game references?

Impro Melbourne’s version will include some modifications, due to our one-hour time slot. We are also adding extra risk elements. Our expert comedy veterans will take 10 titles from the audience and craft a show using a mixture of a comedic scenes and improvisation games to please our audience’s comedy cravings. What if we don’t complete all 10 titles? In that case our guest performers will be playfully punished. This is one of the extra risk elements. But don’t tell the guests—we haven’t.

Oh yes, there are special performing guests such as:

Mar. 25 – Derek Flores
Well-known comedic madman, he has a long history with MICF. He was part of the legendary Three Canadians and now he tours with his hilarious masked alter ego El Jaguar.

Mar. 26 – Dean Haglund
Yes! One of the Lone Gunman from X-Files. He is at MICF doing his X-Files impro show.

Apr. 1 – Jason Geary
Impro Melbourne Alumnus, part of the How ‘Bout This podcast team, the iSelect guy and one part of the duo doing the show Arcade Arcade 2Up.

I really hope you can catch us during the festival. We are on every Friday and Saturday night at 11pm in the Melbourne Town Hall. Be sure to book in advance, as this show will sell out.

Previous post: Special Workshop: Story Without a Doubt Through Physical Improvisation (27 Feb)
Next post: My 20 Years of Late Nights at the Town Hall