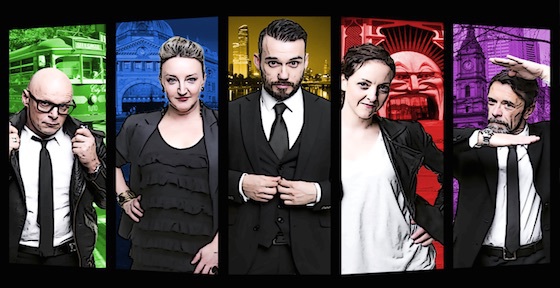 If you have never been to an improvisation show - you must. Every time I go I'm amazed at the skills, talents and depth of knowledge the actors have. How do they make connections to so many ideas and so quickly? From just a keyword or two they never fail to somehow turn this into comedy – it's mind-boggling.

I'd never seen this group of award-winning veterans but always enjoy improvisers. After a sell-out season at MICF, the team delivers a fast-paced comedy!

Grand Theft Impro is a dynamic, never the same twice, 50 minutes of stories, scenes, songs and comedy. The improvisers develop sometimes-controversial storylines and songs using 10 random titles posed by the audience. Because of the nature of their acts, they can't rehearse and don't have time to plan together. It's all off the cuff genius delivered with contagious enthusiasm.

They'd have to be pretty thick skinned because at the end of each scene of the audience votes on whether it's a fail or completed successfully. This means the audience dictates the quality of the show! A couple of times they totally recreated the acts when the audience voted with a thumbs down and once again proved they could use their imaginations and razor sharp wits to bring new light to each phrase/title/word/tweet/moment/nightmare. Some of the titles chosen tonight were: I love my bank manager, Getting over pneumonia in a tornado, Looks good in high heels and my personal favourite and perhaps predictable topic: Day 1 of the Trump residency (god forbid!).

The show features Impro Melbourne's Ensemble as well as special guests so no two journeys are alike, with new players and new scenes every single show. Our team featured Patty, Sarah, Tim, Mike and guest Russell. Gee, they were good and boy did we laugh. At one stage I realised the actors were shouting to be heard over the laughter and later I realised I was enjoying myself so much I forgot to take photos!

This show is followed later by a musical impro called 'Smells like a storm'. If I hadn't had to get home to babysitters I'd have stayed for that too for sure.

Downstairs there's an old pub that reminded me of the Sullivans and a bistro. You can take your drink upstairs with you so this is the perfect fun night out. Last night there was a board game night on. Eat, drink, play games and be entertained! At only $15 online or $20 at the door you couldn't get a cheaper night out. What more could you ask for?